FEM Analysis of a Tank Foundation 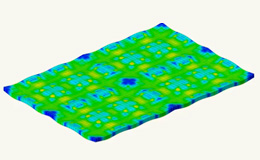 Since a number of tanks will be installed on one foundation, design was conducted considering the interphase of the tank.

With the tanks installed densely on one foundation, the arrangement of the piles was planned in a manner of which the immense weight will be transmitted to the piles without difficulty.

The 2nd floor deck slab was modeled as a solid and floor stiffness was considered in the design.
The number of braces used was minimized in the design.
The pedestal of the column base was also modeled and the upper frame down to the ground beam was analyzed in series.
For large and heavy equipment, consideration was made so that the horizontal force can be effectively transmitted during an earthquake. 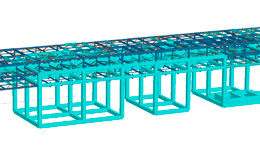 Design was performed with expansion joints at every 50 meters.
For cost reduction as well as fireproofing, the first floor and the second floor was designed as reinforced concrete structure.